It’s been nearly a month now since training recommenced and with it brought an incredible distance in liberation points as the team and pigeons made their way north to the latest site positions approx. 60 klm on the north eastern side of the island at port of Santa Cruz, the last of the island training prior to heading out over the open waters of the Atlantic Ocean for the mid sea liberations.

With 2,621 pigeons on board and after an uneventful early morning journey the convoy reached is destination and following a short time for the pigeons to settle Abel was happy to release the pigeons at 10.50 in a moderate 20-degree temperature broken clouds and light nne wind.

With such focus now on the sea races and future hotspots competitors were keen on the livestream to see how today’s race and returns would span out as its been challenging so far with some erratic returns.

With forty minutes flying time to the delight of those at the loft and those on the internet a wave of pigeons could be witnessed landing and entering the loft.

Taking top spot and honour of 1st international today ,we have team Italia and pigeon “Victor 1”on the clock at 11.41.17.05 for Team Nitu Robert & MogadjaIonal, taking the runner up spot we head across the Atlantic to the USA  Team Easley and pigeon “Desperado” timed in just decimals behind the winning pigeon with a time of 11.41.17.75, the UK and team England new participating syndicate of Team Tinks Treasurers celebrate their first Top Ten position with 3rd International with their entry “Lean Machine” coming home on 11.41.18.10,team Belgium and the pigeon Elite Centre(PEC) Syn pigeon “Midway Dominates” take the 4th spot for team Belgium as they record 11.41.18.35 ,coming over the finish line narrowly ahead of team wales and the welsh national winners syn  pigeon billy for 5th  which holding form lately making steady progress up the king of sprint average board ,for 6th international we return to team Belgium as team ace 63 entry ruud 89 records a time of 11.41.19.01, the 7thInternational position sees pigeon “Tequila” for team Germany and entrant Team Ozam  on 11.41.20.15,we remain in main land Europe for 8thInternational as with Denmark and TeamMeldgaard&McBurnie on a time of 11.41.20.50 were just seconds  behind the winner and with a trap full of arrivals battling for positions its team England that take the final two Top Ten positions in 9th and 10th with Team Central Lofts and pigeon “TaylaJack” just ahead with a time of 11.41.20.75 of the Southampton Mafia Syn’s pigeon “Franco”  for 10th on 11.41.20.90

With such an impressive finish by the leaders today witnessed by everyone watching it, was for the first time pleasing to see the pigeons returning in their masses at regular intervals and out drawn out and as the afternoon went on this pattern continued with dusk approaching the final arrival on day one made extensive use of any remaining light to record its arrival at 19.02.44 which brought the final number on day one to respectable 2,458

With the sun rising on day two this also brought a steady flow of early arrivals indicating that whilst they clearly made a directional mistake on route they were soon to realise their errors as the first pigeon touched down at 08.20 starting yet again another steady flow as a further sixty plus arrivals returned.

With the island training completed we were all set for the first challenge of open sea liberations from the rear of the Naviera Armas vessel sailing between Tenerife and Gran Canaria with 2,520 pigeons on board Abel and co made the evening journey to port of Santa Cruz for the late evening sailing to Gran Canaria, this due to the schedule time table was the only option available to the team to ensure an early liberation the following morning so with the vessel sea bound to Gran Canaria on arrival on the island the lorry would disembark at the quayside and await the final call to re-board at the rear of the ferry in an ideal position to liberate at the designated distance of 20 km off the Tenerife shoreline giving an overall flight path of 80+ km of water and land.

With fanciers being able to track the current location and speed of the vessel during it’s return crossing with the speed of 21 knots dropping, we were aware that the spot had been reached and a liberation was imminent.

With the livestream message received indicating that the pigeons were away at 09.40 to ables delight in clear blue skies with temperatures at 20 degrees set to increase to a warm and humid flight as the day goes on, with a new experience underway again it was to be a wait and see situation to see how the pigeons would take to their new adventure.

With the liberation some 25 klm we were all on the assumption that the pigeons would head straight for land near the Santa Cruz area of Tenerife, but there was also the possibility that some would come into land a little further down the shoreline therefore taking valuable time off the flight something unknown.

At the lot with a clear blue sky and temperatures rising by the hour,a small number of fanciers had gathered with the Arona loft team to await the arrivals, and it was too long as the hour past that the first pigeons were spotted high over the loft racing for the honour of 1st International.

With a swift trap no doubt keen to take on water the result soon appeared, taking first International 1st England we see the 2019 Semifinal Car Race winners Murray and Mills claiming the honours with their entry “Seas Pigeon 1” timing in on 10.45.34.20,taking 2nd and 3rd we head to Norway as Team KrystofBury and pigeon “Radiant Sky” on the clock on 11.45.35.05for 2nd  just edging  out his fellow countryman Team V & V Haugesund with their entry “Dulce” settling in 3rd on 10.45.35.60, team Italia and entrants Team Nitu Robert & MogadjaIonel pigeon “Victor 1” the previous race winner is again flying high in the result for 4thInternational on 11.45.35.60, with team USA and pigeon “WT” for Thomas Kuiper coming in close behind in 5th on 10.45.36.55,we head to Slovakia for 6thInternational with pigeon “MJM Blue Diamond” for Team Mojzes Milan &Jaro records a time of 11.45.36.60, Team Schupp for team Germany take the 8thSpot with pigeon “Skyfall” on 11.45.37.85,just edging the two neighbouring island entries from Gran Canaria of Team Yahvé, Oliveiro, Fredy and Miguel with pigeon “Blending Element” on 11.45.37.95 and pigeon “Afrotime” for Gustavo Medina González on 11.45.38.25 into 8th and 9th positions, rounding off today’s Top Ten positions we go to Turkey as Team Ahmed Cavdar`s entry “Crazy” finishes on 13.45.38.95

With the uncertainty of how the pigeons would react and encounter their first sea liberation it was at first pleasing to see so many coming at regular intervals but unfortunately as the day went on the arrivals seemed more spread as the numbers increased slowly towards 2,000 by early afternoon, indicating that whilst most had made the journey unscathed there was still 30 % of the convoy still adrift and unaccounted for as we headed into early evening, with sunlight turning to dusk and with livestream continuing  to relay each arrival, it could be seen that the increased temperatures during the afternoon and the liberation from sea was playing its part as some returned wings down indicating they had certainly had to work to reach home.

As the sun set on day one 2,004 pigeons were safely perched and with hope of further arrivals on day two we awaited the sun rise the following morning.

Day 2 and considering the number of birds away we expected a flurry of arrivals to return but again from 08:00 it was just ones and two coming this practise continued throughout the day and again on day two an additional 30 or so pigeons had overcome their night out, resulting in a percentage rate of 81% returns.

With 2,034 pigeons remaining in the race and with the second Sea Race shortly to take place the following weekend and with the hope of some short island training during the week we were informed that another calima was again approaching the Canary Islands which would hamper any intentions of additional shorter island, so at resent we look forward to Sea Race two once conditions improve.

Following the completion of Ten island training races and the first Sea Race under our belts The King of Sprint Averages are again altering race by race, currently returning to Top Spot with 29,673 pts we have Team Tarebedi from Lanzarote with pigeon “Eugene”, in 2nd we have the Slovakian team of PJ pigeons with pigeon “PJKannia” 29.323 pts and in 3rd it’s the German entry of Helmut varshing for Team Aa.PerleII with 28,893

With Sea Race 2 on the horizon this is now creating a lot of excitement amongst the participants as we zoom in on the first Hotspot/Car race  from Gran Canaria when the winner will walk away with the first major prize of the year,I n addition to this the nominations are now open for that little bit of additional interest.

With fanciers now looking for flights and accommodation for the Final Race, here’s some important dates to take into consideration for the week leading up to the race live basketing will be held on Thursday 26thMarch,the welcome evening hosted by the Ledesma family will take place on Friday 27thMarch followed by the race itself on Saturday  28th and the Gala evening on Sunday 29th. 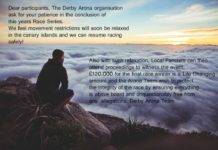 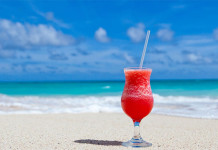 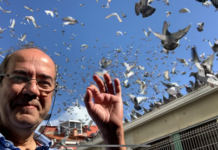