Another year Begins in Tenerife

Since the beginning of April to the end of sept the derby Arona lofts have been accepting entrants for the 2019/20 race series of the derby arona Tenerife one loft race .with a guaranteed first prize of 120.000 euro for the final race winner, plus three car races to compete for.

Over the past six months a constant and steady flow of entries have been arriving on the small island of Tenerife as we prepare for the first training race in the pre-selection phase of the race and more importantly the final race series at the present location which has served the race organisers well over the past fourteen years, but feel it’s time to expand to accommodate to a new more approachable and open area due to increased interest and entries annually.

From the estimated numbers received, we see that an amazing 3,199 pigeons representing over 35 countries around the world havesuccessfully overcome thepast few weeks and months of settling in and loft orientation period.

And as we approach December, abel Ledesma who is in charge of the loft management team has been daily exercising the inmates in preparation for the rapidly approaching first training race scheduled for dec  4th, with the all the activity in the loft, behind the scenes in the administration dept consisting of jose and Gladys they too have been working tirelessly to ensure all the pigeons and registration is completed prior to such date, no mean feat when you’re dealing with in excess of 3000 pigeon assignments from a large number of different countries nationalities and languages to overcome, but thankfully through hard work and dedication to the cause with minimal issues to rectify all has been achieved ready for the start of this year’s campaign.

It’s Dec 3rd andafter months of preparations and excitement, the team, the pigeons and a vast number participants from all corners of the world are focused on the small plot of land in the Atlantic ocean called Tenerife for the start of the 2019 race series.

By now each participant would of received their login details and entry list, indicating that their entries have been basketed and set for the short journey the following morning to the liberation site just a few miles away from the loft for tr1, whilst some may deem such a short distance trivial, at this stage it gives the pigeons experience to overcome any fears of being in the baskets overnight and released for the first time in masses from a strange location and orientate back to the lofts in the small residential area of guaza positioned between Tenerife south airport and familiar holiday resorts of los Cristianos and playa de las Americas.

With nearly a hundred participants and interested parties logged in to the arona livestream plus many more on other social media links we patiently welcomed everyone back for another year in arona under the clear blue skies with a traditional Tenerife temperature at the loft gradually rising to the excess of 21 degrees.

With news from the liberation site indicating a 10.10 am liberation, we patiently waited for the first sightings of pigeons above.

With just eleven minutes of flying time, we could see that a small number of pigeons from the initial liberation had made an early break for home and as such on landing made their way in to record their arrival, taking the top spot and winner of tr1 we go to Slovakia and team miroslavblasko with their pigeon dianka timing in on 10.21.38.70, just ahead by a decimal of two arrivals for the Netherlands team in 2nd and 3rd positions with team comb brands and pigeon Dijon taking the runner up spot on 10.21.39.60,holding off their fellow countryman Lorenzo van Russell in 3rd with his entry galante recording a time of 10.22.01.90,European neighbours Germany take 4th international with pigeon when the eagles flies for the sandra’s family on 10.22.05.00, team china takes 5th position with team li jing&herbotssyn recording their entry yeunpkenza with a time of 10.22.06.70,for 6th spot we go to Belgium with team team fam steyvers and pigeon nina crossing the line on 10.22.07.95, team Germany take two more high positions in 7th and 8th, with team olska with pigeon danny squeezing in on 10.22.34.70,ahead of pigeon Sammy for team German storm in 8th on 10.22.37.55, the winning nation take another position in the leading batch in 9th as team torsya from Slovakia comes in on 10.23.26.35, leaving Germany to round off todays top ten with their third arrival and a second for team olskawith pigeon coming home on 10.23.28.35

With the first arrivals safely in the loft by such time, a large number were high above making their way down to the trapping area and amongst these were the first uk entry as team England takes the home nationals title on this occasion with team toto buzi loft and pigeon Julia p taking 14th international with a time of 10,23,3195

As you can imagine and witness on viewing the live race, with over 3,000 pigeons returning from just a few miles away the skies and loft was soon to be a mass of feathers as each in turn battled for position and entry to the loft for feeding, and although its nice to see our names on the leader board it’s a good feeling knowing that all your entries are safe and sound back at the loft as the result updated, indicating they were no worse for wear after their first overnight ordeal in the basket.

On day one and with the majority of the pigeons home in the first hour of release followed by a few late arrivals during the afternoon the clock had recorded 3,157 pigeons from the 3,199 liberated, this was backed up the following morning by more pigeons returning following a night out indicating by noon the following day the team can announce a returns rate of 99.09 ..this will no doubt increase further throughout the day as no doubt the odd one or two will still return following there miss judgement and route taken the day before.

With the start of training in time and from here on in its where all positions gained will play a part of the first average awards namely “the king of sprint average“an award for the overall average winner from the first to last race of the series more on this will unfold and current leader will be confirmed as we progress in the race series.

And with 3,170 form the first outing successfully overcoming the first hurdle, the team once again basketed the entries for the second training flight a little further away from the loft to the 5klm stage, with broken blue skies and a light northerly wind, the team were keen to get the convoy away as the mid-morning temperatures increased to over 23 degrees, releasing at 10.15.

With the livestream up and running and everyone logged once again and keen to spot the first arrivals it was just a few minutes following the liberation that again a small number seemed to have broken away from the batch following liberation making a direct line for home, and following a moment of hesitation made their entry to record their arrival known on the clock just ahead of viewing a large batch coming into view on their approach, to the loft.

Taking top spot of 1st international we have team fam sevyers from Belgium who continued to hold a top position following their top ten presence in training race one, with the same pigeon nina moving up from 6th to 1stwinning by narrowest of margins timing in at 10.28.15.60 and hence becoming an early front runner in the king of sprint averages

Team Hokl & N also from Belgium had to settle for the runner up position as their entry arya followed in on 10.28.17.40,team ion ureche from Romania takes 3rd international, with their entry paky coming home on 10.28.17.75, the first uk entry for team England takes the 4th spot as team m b. Lofts pigeon princess sumo registers a time of 10.28.28.00, we go to team Germany for 5th for team Daniel wheichtmann with pigeon major prospect, on 10.28.29.80, Team Van der Heide & de Vries from the Netherlands landed their entryflintstone for 6th open with a time of 10.28.31.45,holding off a challenge for 7th from team Armando soto racing pigeon loft from Mexico with pigeon superstar on 10.28 31.45,team Belgium are again flying high today with their third arrival in the top ten as pigeon chispa for team penne, roelandt & blancquaert crossed the line on 10.28.32.80 in 8th position as a result team Germany and team feuriger,fluegelkrosigkhad to settle for 9th with pigeon mingo coming in on 10.28.33.55,team hungary come in in tenth and on doing so rounds off today’s top ten positions with team Hannibal and pigeon jacintusz timing in on 10.28.40.05

Once again the team are pleased in the way the pigeons are adapting to their new experience and whilst there’s always going to be losses in one loft races, over the last two training races these thankfully have been minimal, and the trapping has been much to be admired, with the morning progressing the main draft of pigeons were home within minutes of the winners which is expected at this stage and distance, leaving just a few adrift opting for a longer orientation at the liberation site, time on the loft or heading a different route however by nightfall and an update on the clock resulting in 3,139 pigeons recorded this gives an overall returns rate of 99.02 % and with additional returns the following day these figures were to increase accordingly.

We`re now two races into the preselection races and an indication has already been seen how settled and content the pigeons are within the new surroundings, therefore with three more short races to go before the xmas break and more importantly the owners activation period of reserves, we cannot illustrate the importance enough to be ready to go from 12th December and secure your entries within your team for the future at a rate of 220 euro per pigeon,

Be aware Each year there’s always a strong outside interest to join the race via third party activations ..in some cases your loss could be someone else’s gain,resulting in them walking away with the ultimate glory and 120,000 euro final race prize, so consider your options carefully before the deadline date.

It would be appreciated if fanciers could forward their team photo for the purpose of future reports once activation is completed and allow the arona team to updated participation profiles. For further information on the process of activating and all other relative information regarding the race go to www.derbyatlantic.com

Arona TEAM - August 8, 2016
0
From early childhood, José Ledesma was interested in the pigeon, but it was not until 30 years old when he discovered the great racing... 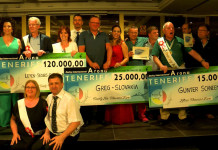